Why Queues Are Being ‘Designed Out’ 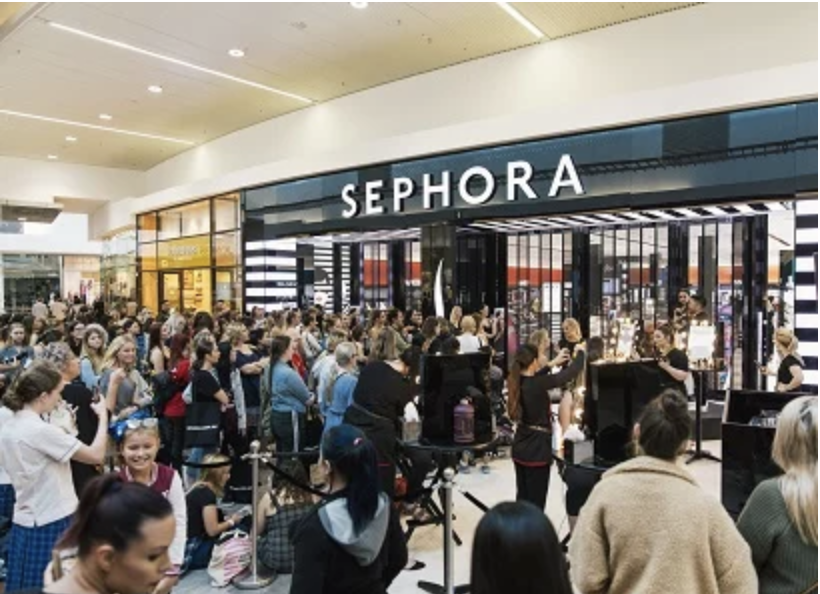 Whether it is lining up to pay for your groceries, making a bank transaction, or waiting for a table at a trendy restaurant, time costs money.

As businesses become aware of the direct and indirect costs of waiting, they are looking at innovative ways to reduce these expenses by “designing out” queues.

The challenge for anyone serving the public in a way that involves waiting is that they must manage people’s perceptions as well as optimising the rate at which they are served.

People are not ships
In a logistics context, say stevedoring, managers can to some extent predict delays or weather conditions that have impacts on efficiency. They have historical data about how long it takes to unload a ship, normal volumes of containers and how much labour is required. Using this data, they can set delivery windows so that ships can deliver quickly. Less queuing takes place and therefore less time and money is lost.

These delivery window times and optimised routes are communicated to pilots. Accordingly, they sail into ports “just in time” to be unloaded.

For example, people don’t consistently arrive at the supermarket checkout area in five-minute increments, with exactly six items. If they did, retailers could mathematically determine exactly how many staff to employ, and when to employ them, to maximise service levels and minimise costs.

Hitting the queuing ‘sweet spot’
Businesses face the challenge of identifying the optimum point where the costs of providing the service equal the costs of waiting. People in queues behave in ways that create direct and indirect costs for businesses. Sometimes customers will baulk and simply refuse to join the queue. Or they join the queue but renege, leaving because wait times are too long.

This behaviour leads to measurable costs. These costs are both direct, like abandoned carts, and indirect, like perceptions of poor service quality, increased dissatisfaction and low levels of customer loyalty. 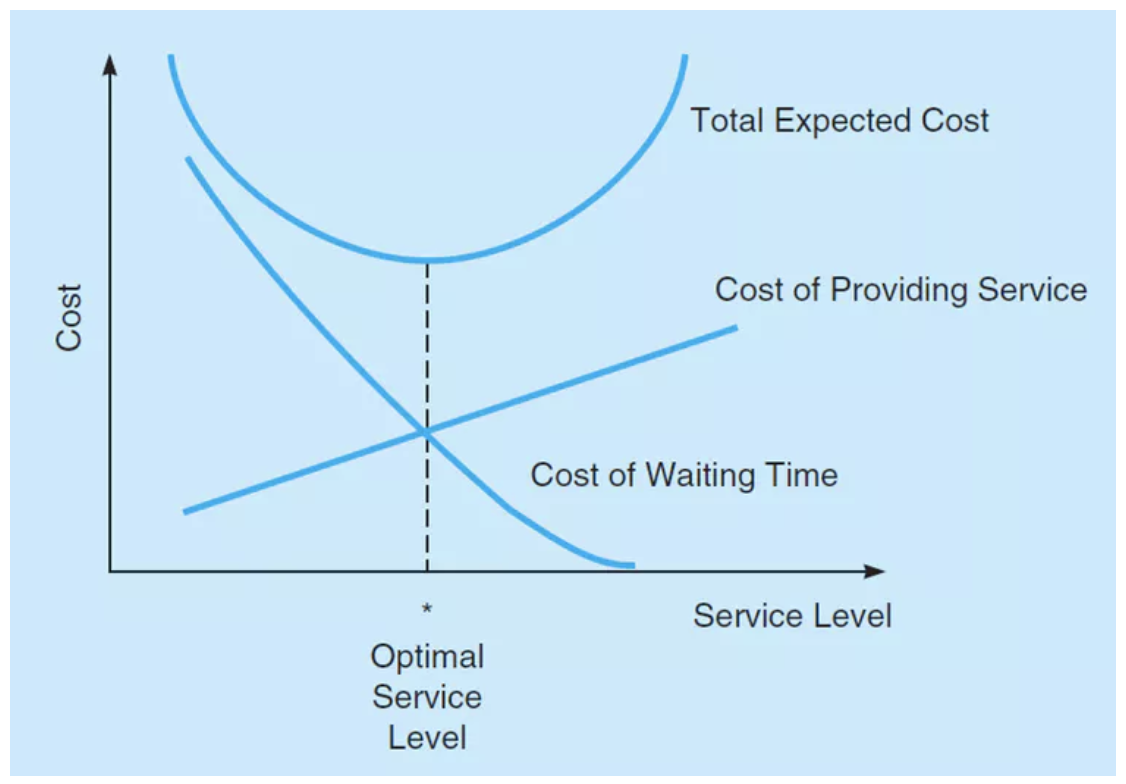 The inverted curve describes the optimum balance between the costs of providing service with the costs of making customers wait. Author provided.

Queuing theory and the evolution of the queue
Queuing theory evolved from the work of Danish engineer A.K. Erlang. In 1909 he experimented with fluctuating demand in telephone traffic. By the end of the second world war, Erlang’s early work had been extended to more general problems and business applications, such as airports. Queuing theory is now widely used to examine arrival characteristics, waiting behaviours and queue performance to predict waiting times.

Airports have also sought to reduce the waiting time for luggage collection by moving the carousel further away from the arrival gate. Passengers spend their time walking instead of waiting.

The nature of a queue has changed and will continue to change, as populations increase and consumers become increasingly time-poor. In a retail context, the traditional grocer, who would hand-select products for customers in a first-come-first-serve manner, has given way to self-service supermarkets since the first such store, Piggly Wiggly, opened in Memphis, Tennessee, in 1916. Promoting lower prices and better value, these supermarkets were the first to provide “checkout stands” where shoppers lined up after selecting their own products.

The original “grid-style” checkout allowed retailers to serve multiple shoppers at multiple checkouts while also presenting them with a small range of impulse items, such as chocolates, soft drinks and magazines. Known as a single-channel, single-phase system, this is still the dominant format. 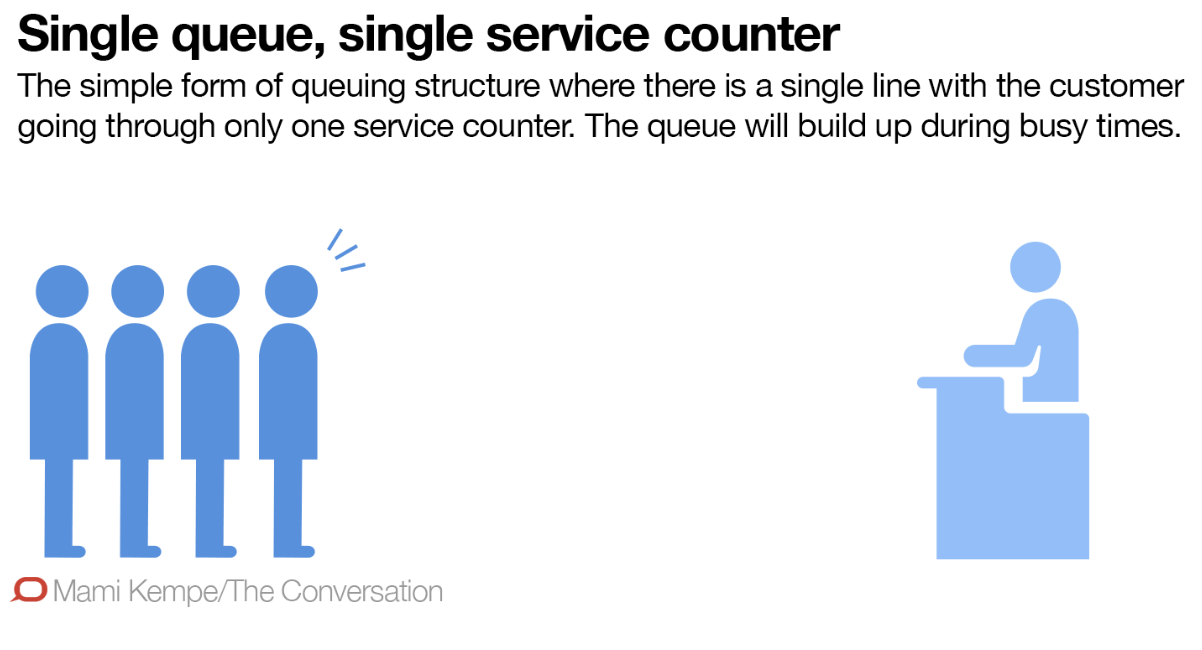 However, more and more retailers are moving to a longer single line, with customers being served by multiple devices. An example is banks of self-serve checkouts. This is referred to as a multi-channel, single-phase system. 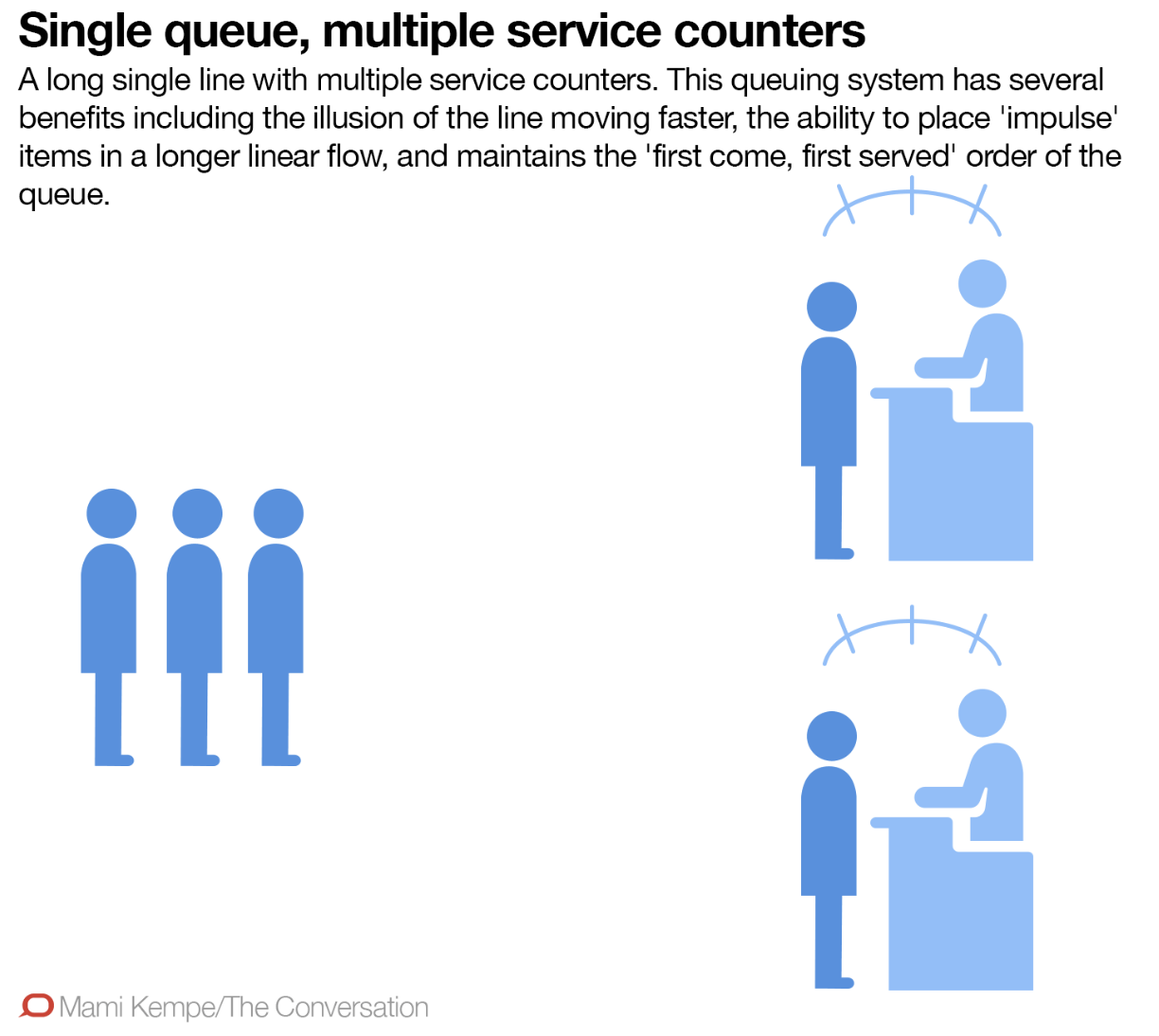 The reason for the third benefit is that with two or more queues, versus a single queue, you don’t know which one is going to move faster. This creates an unpleasant feeling and a sense of inequity, which the multiple-channel format seeks to diminish. 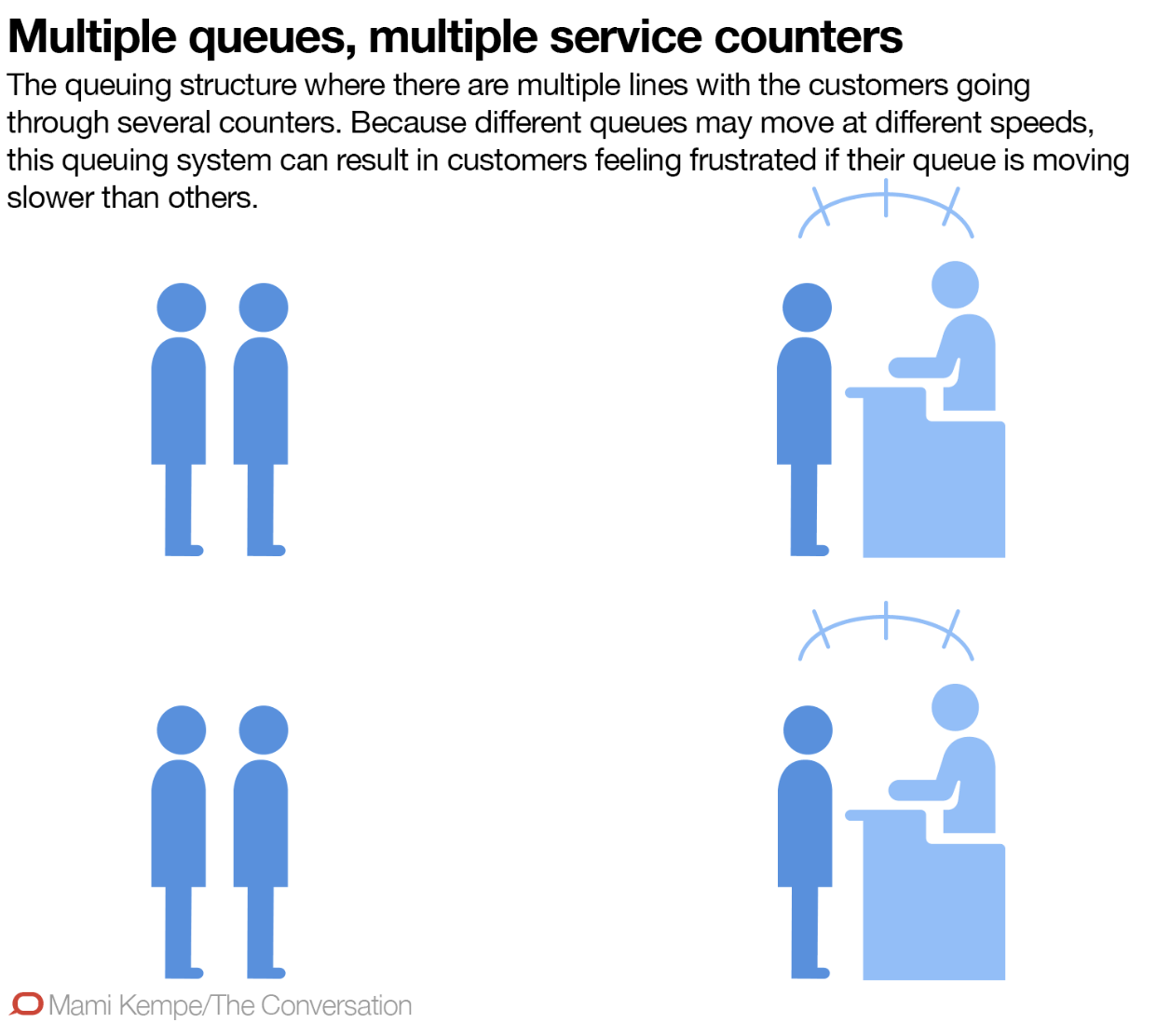 Why does your queue always seems slower?
Two interrelated theories explain this perception. Illusory correlation refers to an error in human judgment when a person perceives a relationship between two salient variables that are not in fact correlated. Consider washing your car and it starts to rain – we might think washing the car “causes” it to rain. Or we might think red cars attract more police attention – there is an “association” between driving a red car and getting a speeding ticket. In a queuing context, two important variables are at play, “speed of queue” and “your time”.

Added to this is amplification theory. This draws on research published in 2001 that proposed that “bad is stronger than good” and “bad memories have a more powerful psychological impact on us than do good events”. In other words, we are more likely to remember slow queues than times when we have been in faster queues.

In addition, unoccupied time always seems to pass more slowly than occupied time. This is why businesses are increasingly giving you something to do while you queue. There may be magazines close at hand, or a TV screen mounted on the wall in a bank.

The most obvious solution is to keep you moving. It’s a strategy used at festivals and tourist attractions where “snake” lines are common. The snake line also helps free up space, makes everything appear more orderly and equitable and prevents queue-jumping. People prefer movement, so standing still or waiting in a queue with nothing to do can create a negative experience and negative evaluations of service.

Moving beyond the queue
Many sectors are designing out the queue altogether, or at least the perception of queuing. For example, in many banks, government departments, libraries, retail stores and airports, the queue is beginning to disappear.

At airports, check-in kiosks have replaced queues and counters. The kiosks are dispersed widely throughout the terminal, thus providing travellers with perceptions of spatial convenience. In retail and service landscapes our perception of convenience diminishes the further we have to walk, so clustering of essential services, including check-in kiosks and retail outlets, is replacing the traditional linear design of airports. Spatial convenience gives people the perception of less crowding, no queues, ease of access and mobility.

Retailers are playing with innovative layouts and removing the queue altogether. Bank queues are also becoming a thing of the past; a new Bank of Queensland branch fit-out invites customers to “take a seat” rather than line up for service.

So, are we still queuing?
Well, yes and no. We still have to wait, but the ways in which we wait, especially the perception of how we wait, is definitely changing.

The new Amazon Go store, for instance, has completely removed all the checkouts. This ensures customers will never have to queue for service. The only problem now is the long line-up to actually get inside the store!