How Many Apps Do Smartphone Owners Use?

How Many Apps Do Smartphone Owners Use?

Most apps are not even retained for a full day.

There’s almost always an app for that, whether “that” is a taxi service, food delivery or a video game. But with so many popping up all the time, how often are any of them being used? 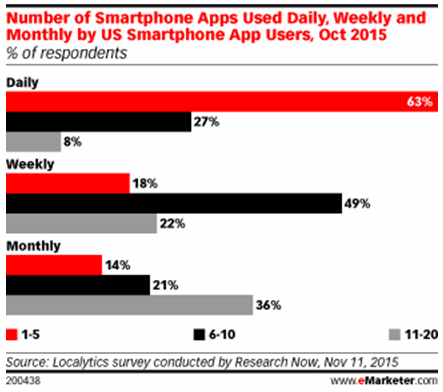 A Localytics survey, conducted by Research Now in October 2015, reports that 49% of US smartphone app users use six to 10 smartphone apps each week.
A November 2015 Pew Research Center report goes into more detail: 30% of US smartphone app downloaders had one to 10 apps downloaded on their phone as of February; another 32% had 11 to 20. The report paints a slightly different picture when it comes to weekly usage, however, citing 46% of respondents using one to five apps per week, whereas only 35% use six to ten. 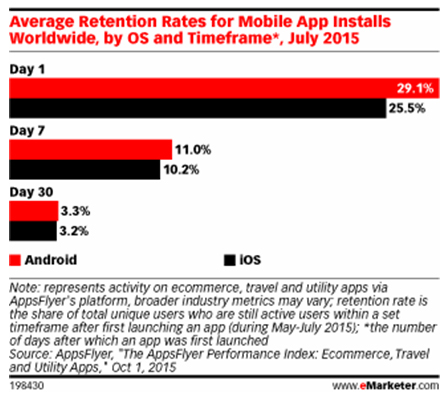 At the end of 30 days, a tiny 3.3% of Android apps and 3.2% of iOS apps still had active users.
Apps installed for organic reasons, as opposed to the result of paid app-install ads, were more likely to be retained. After 30 days, an organic app install was 156% more likely than an ad-induced install to result in continued usage on Android phones, for example.